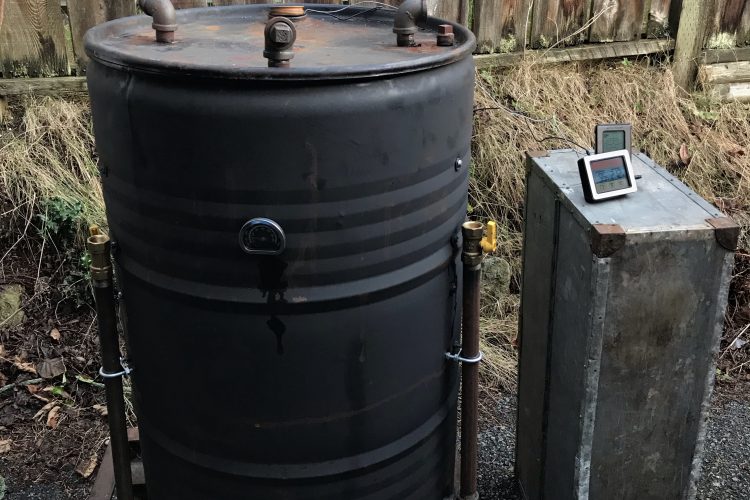 This weekend, for the first time since the summer just gone, I fired up the beast – my Ugly Drum Smoker. And it was ultra-cool feeling to make some barbecue!

The usual routine to light it, wad up a couple sheets of newspaper, cram them into the base of the barbecue lighting chimney, place 10-12 pieces of hardwood charcoal in the top compartment, and then light the paper on fire.

Within five or ten minutes (time becomes irrelevant when barbecuing) the paper is burned up and the charcoal is beginning to turn white from the heat. I waited until about half the charcoal pieces were ignited and then dumped the chimney of charcoal into the basket of charcoal in the base of the drum.

Then I let that start to heat up the drum. I’m a man of science, seeing as I don’t yet have a feel for the way the UDS works so I lower a thermometer probe into the centre of the drum.

Once the drum has reached temperature, I placed the six chicken thighs on the grill/rack. I put a thermometer probe into one of the pieces of chicken and then closed the lid and let the barbecue start smoking and cooking.

There’s a saying in the barbecue world, “If you’re looking, you’re not cooking.” So I leave the drum closed and let the smoke and heat do it’s magic.

Oddly enough, I really don’t know how long I left the thighs on the grill. It was about 45 minutes …. here I am saying I’m a man of science and yet I didn’t record the time in and out. Weak.

The first batch that I did, yep, I did two batches, turned out perfectly cooked. I pulled them off when the internal temperature of the meat was 180°. ?I had used my homemade rub/coating and the kids found it too spicy (it does have a powerful bite to it!).

Once the first batch of thighs was done and I had tasted them, I realized that it was ridiculous to fire up the UDS just to do six thighs. So I grabbed another six from the fridge, tossed them in a bag with sone store-bought Shake N Bake mix, and them put them on the grill.

The second batch turned out just as beautifully. And not nearly as spicy so the kids both had a taste. Not a big taste – they’re both not big on eating meat right now.

Bottom line, the chicken thighs were awesome. But next time I light up the grill I will be sure to have more meat ready to go on the smoker. Probably a big old pork loin that I can barbecue and then slice up for lunches during the following week.

I’ll be sure to share pics of my next Ugly Drum Smoker experience.

A Little Bit About Me

Hey folks, I'm Stacey, a Dad in the Burbs. Although this blog started as a "dad blog" it has morphed into more of a lifestyles blog. I write about food, the durable goods we use, theatre experiences we enjoy, and the random adventures we embark upon. I am open to working with brands and PR people.

If you need to contact me, send me an email srobinsmith "at" gmail dot com.

This website uses cookies to improve your experience while you navigate through the website. Out of these, the cookies that are categorized as necessary are stored on your browser as they are essential for the working of basic functionalities of the website. We also use third-party cookies that help us analyze and understand how you use this website. These cookies will be stored in your browser only with your consent. You also have the option to opt-out of these cookies. But opting out of some of these cookies may affect your browsing experience.
Necessary Always Enabled

Any cookies that may not be particularly necessary for the website to function and is used specifically to collect user personal data via analytics, ads, other embedded contents are termed as non-necessary cookies. It is mandatory to procure user consent prior to running these cookies on your website.