I got home yesterday to find that there was nothing in the fridge to feed the family. And they were hungry. Hungry and quickly transitioning to hangry.

What to do? Yes, that is correct, I turned to the Instant Pot. And, I went way out of comfort zone because I put FROZEN meat in my Instant Pot.

I had four pork chops frozen. Frozen into one solid block. Rock hard.

Did I mention the kids were about to turn on me? They were. So I turned the Instant Pot to sauté, added some olive oil and I let it heat up.

Then I dropped in the chunk of frozen pork. And poured in a cup and a half of chicken stock. Put on the lid, flipped to the lid to “seal” and the timer for 15 minutes. And then I stepped away to start working on some Carolina-style barbecue sauce.

Because the chunk-o-pork was frozen it took a few minutes for the liquid (chicken stock) to get up to temperature. Once it did, the timer started counting down from 15 minutes.

Once we got to zero, I was anxious to see what was inside so I did a “controlled quick vent”. Opened the lid and saw that my chunk-o-pork was now four sort of frozen pork chops. Good news!

I poured the Carolina-style barbecue sauce into the Instant Pot and put the lid back on. Sealed it. Set it. 15 minutes.

In no time the Instant Pot was up to temperature and under pressure.

15 minutes later I did another quick pressure release and opened up the pot. The pork was now ready to be “pulled” which I did in a large stainless bowl. Using two forks I pulled the pork into shreds.

I ladled on a little of the barbecue sauce and mixed it all together.

I split a few Kaiser buns and placed them under the broiler for a couple minutes to get them browned. 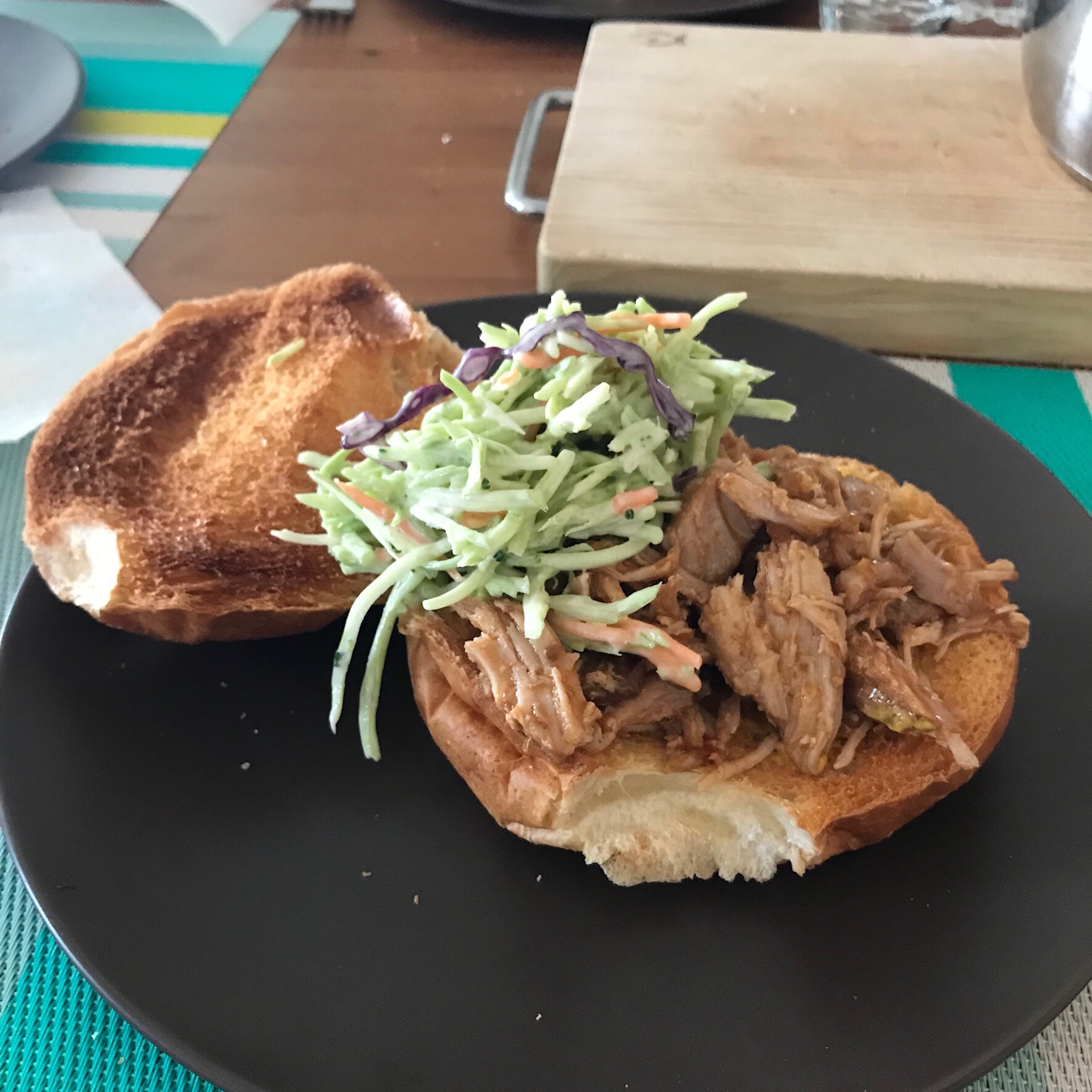 Then I scooped some of the pulled pork onto the bun, added a scoop of coleslaw onto the other side of the bun, ladled on some more of the Carolina-style barbecue sauce, and got ready to eat.

The most amazing thing? Both kids liked it and they actually ate it!!

And just like that, they went from neatly hangry to fully happy.

That’s A Dad in the Burbs style cooking!

Here is my A Dad in the Burbs “recipe” for the Carolina-style barbecue sauce:

I added all the above ingredients into a medium sized saucepan, brought it to a boil, reduced the heat to low and let it simmer while I waited for the pork to cook in the Instant Pot.

Our first time having our vaccination record checked and it was quick and painless! So happy to do our part to help our community get through the pandemic.

At some point in the not too distant future our house and our neighbour’s houses will probably be bought by a developer and torn down to make way for a higher density housing. Probably.

Just to mess with the entire process I’m thinking of buying this Halloween skeleton decoration and burying it in the garden bed in front of our house.

Imagine what would happen when they are digging up the yard and dig up a skeleton!

Probably shut the job down for a day or two while they investigate.
.
.
.
#halloween #prank

Thinking back very fondly to the first #5DadsGoWild expedition into the great north woods. @filson1897 was kind enough to supply me with a very warm and comfortable wool shirt.

Seeing as this year’s trip will be in mid-October, it’s safe to assume it will be even colder than any other year we’ve ventured out to @manningpark.
.
I wonder if Filson will send me a new, warmer shirt or jacket to wear when I’m out hiking and camping? What do you say @filson1897 ?
.
.
.
#FilsonLife #filson #camping #getoutside #explorebc #manningpark

Getting out to exercise my franchise this morning. Proud to vote for @bonitazarrillo who is a strong community advocate for Coquitlam.
.
.
.
#voting #votingday #advancepolls

You know your colleague @stacyleebrine knows you well when you return from summer vacation and they bring you a gift of a t-shirt from the best little coffee shop! @bluemoosehope .
.
.
.
#bluemoosehope #bluemoose #tshirt #embracehopebc #travelthecanyon #bestcolleagues

Brisket is done. Rested it overnight wrapped in foil and towels sitting in a cooler. It was still warm this morning and tastes wonderful.
.
.
.
#brisket #traegergrills #traeger #beef #smokedmeat #nomnom

Got up early and started my 13lb brisket on the @traegergrills First two hours on the “Super Smoke” setting. Now set at 225°.
.
Perfect day for relaxing in the bbq pit.
.
.
.
#brisket #beef #traegerhood #traegergrills #smoker #smokedmeat #food #foodporn

Sunday morning doughnut run @doughnutlove.ca .
No line up this morning!
Although in the video the doughnuts look small, they are actually really big.
The fritters are easily the size of the palm of my hand.
The salted caramel was delicious but still my favourite – the apple fritter. Classic good looks and taste.
.
.
.
.
#doughnuts #doughnut #doughnutlove #eatlocal #coquitlam #fritters #food #foodporn